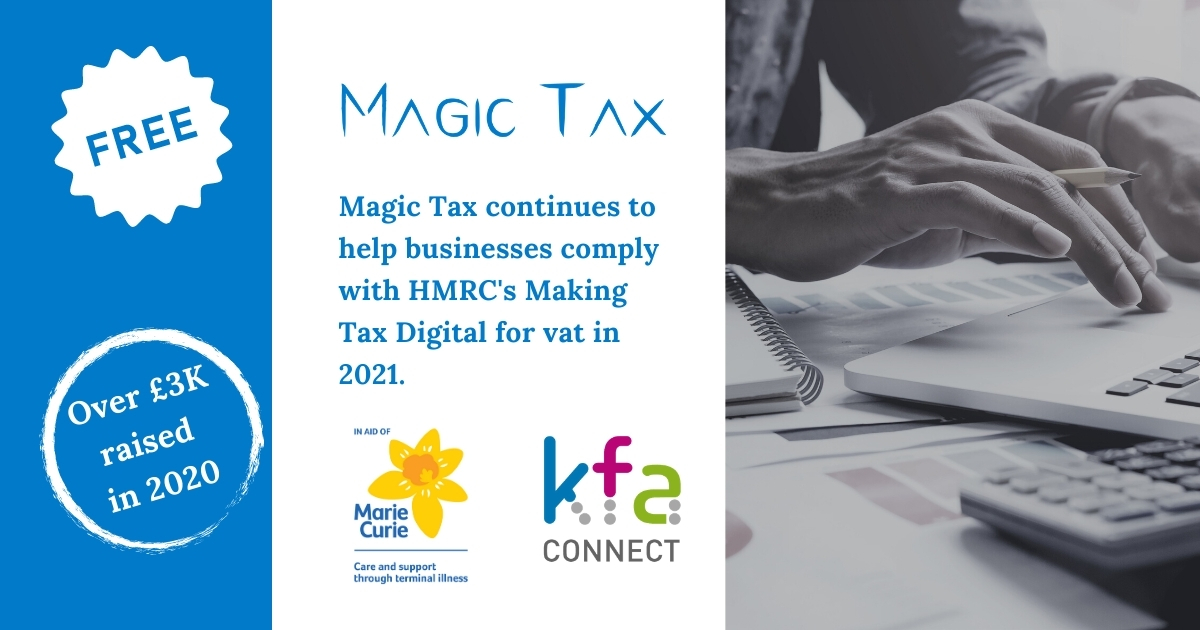 Magic Tax is a bridging software solution and as the name suggests, was was designed to “bridge the gap” digitally between HMRC’s Government Gateway system and your own records.

Many businesses have been successfully using the solution every quarter since it’s launch in 2019 in order to comply with HMRC’s Making Tax Digital legislation which first came into effect for businesses in 2019.

KFA are thrilled at the response to the solution and also the user feedback too.

Magic Tax was not developed as a profit-making solution – just as a good thing to do for the business community – but also as part of their ongoing commitment to raise funds for various charities, which has always been high on the list of KFA’s priorities. Since we were unable to do a physical challenge for charity in 2020 as we usually would, Magic Tax has been more important than we could have imagined when we first started the development project at the end of 2018.

Having now raised £3225 from Magic Tax for Marie Curie, it’s still going strong and will continue to be available for our registered users until such time as HMRC announce that bridging software is no longer an acceptable method of making your submissions.

We wanted to take this opportunity to say thank you to the many Magic Tax users, some of whom make generous donations every time they use the software – and we know the charity are very grateful for the support during this trying time.

We have learnt from conversations with our users, that Magic Tax has helped large businesses who have legacy systems which are not compatible with MTD yet, smaller businesses who run their business on spreadsheets but also lots of sole-traders too!

Many accountants and bookkeepers have also used the solution to file as an Agent on behalf of their clients.

Are Your IT Software Systems Ready for 2021?

GFS & Parcelforce integration with SAP B1 & ScanB1 with BPA Platform